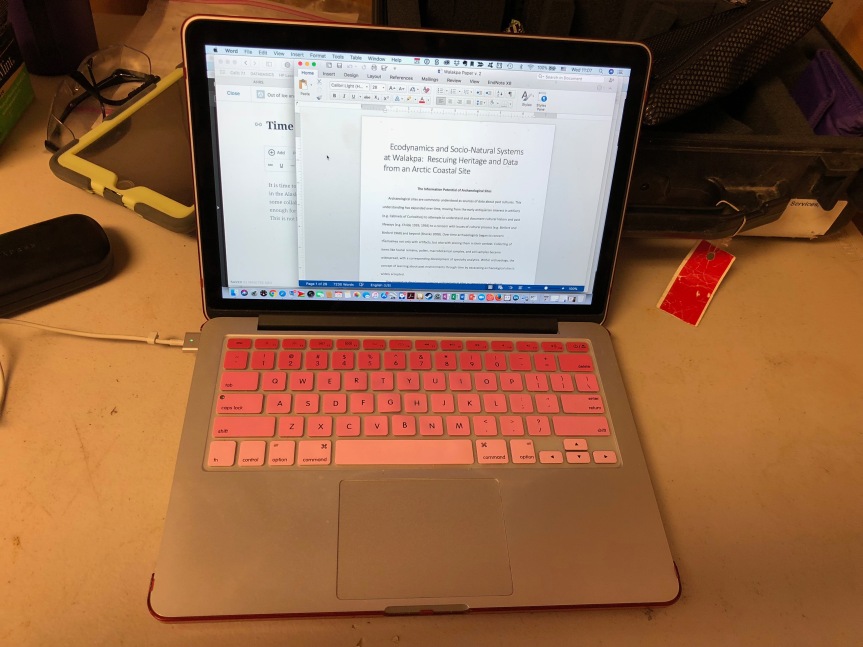 It is time to think about submitting contributions for the Recent Research Notes column in the Alaska Journal of Anthropology.  Get the word out about a project (maybe find some collaborators), let colleagues know about some interesting little find that isn’t big enough for a full article, keep folks posted on what you are doing.  More specifics here.  This is not limited to archaeologists, folks!

I’m afraid I’ve been pretty silent here.  It was not a case of writer’s block exactly; I was writing quite a lot.  It’s just that I had a lot of papers and proposals that were due (or overdue–sorry ’bout that, editor people) and was really trying to get them done.  Between feeling guilty about writing anything that wasn’t the late chapters/papers/proposal sections and actually writing some much that my hands were sore and my brain was protesting, something had to give.

At this point, one article is published electronically (unfortunately behind a pay wall :-), there are three chapters of books (one mine, two co-authored with Glenn Sheehan) off for review, I’ve got most of what I need in to the PIs for two proposals due soon, and I’ve just got one chapter and two shortish encyclopedia entries to write and a proposal to rewrite, an abstract to submit for the Society for American Archaeology meetings next spring (in Hawaii, so yes I’m going), and posters (or maybe a talk) for the AGU meeting in San Francisco in December. Oh, and the annual budget process is starting.

Things are pretty quite in the lab with most of the students graduated.  There is one home school student who is still working away, since he has more flexible hours.  I hope to start getting something done in there myself once the writing frenzy is over.

I haven’t been posting here much lately, but it isn’t because I haven’t been writing anything.  In fact, I’ve been doing almost nothing but write, and my carpal tunnel has been acting up so badly that I’ve pretty much been trying to rest my hands.  Over the past year, I’ve  gotten  invitations to contribute papers to several interesting volumes.  I’ve sent in various abstracts for papers at meetings, some of which led on to proposed volumes.  Then I actually submitted abstracts to a couple of proposed volumes I heard about from my husband or various listservs.  All of them had deadlines well in the future, and I didn’t expect all of them to be of interest to the editors anyway.

But no one turned any of the abstracts down, and I had a more successful field season than expected, which lead to the RAPID proposal to NSF to salvage the Ipiutak structure, which took time to organize and execute.  Then the person in the parka turned out to have more than a parka, which meant more time for documenting things.  So now I have a bunch (by bunch I mean 6) of papers due by mid-January, along with a review, a short presentation for a meeting next week (which the organizers just asked be emailed to them by Thursday, a week before the talk!), travel for that meeting and another one, both in some way connected to developing repositories that are responsive to communities of origin, a proposal, Thanksgiving, Christmas shopping and travel to and from New York State for Christmas!  Yikes!  What in the name of caution was I thinking?

I don’t have much trouble doing papers for meetings.  I tried to avoid the cognitive traps of PowerPoint (Tufte 1993), and use lots of pictures, and I’ve spent a fair bit of time in Toastmasters, so I can get up and talk.  This is not a surprise to those who know me :-).

I can even write (via keyboard or voice recognition) fairly quickly, thanks to Freshman English at Bryn Mawr College.  Having to have x pages handed in by 9AM Monday morning come hell or high water concentrates the mind wonderfully.  However, actual papers, with proper references, formatted as required by the particular journal or publisher, take a bit more time.  I’ve got one paper submitted, four in various stages of writing (one of which the research for is continuing but almost done), and will start the talk for the meeting tomorrow.  My hands and wrists hurt a lot.  So does my head, now that I think about it.

This work by Anne M. Jensen is licensed under a Creative Commons Attribution-ShareAlike 4.0 International License.